An Early Qing bowl with the \"Magic Square\" motif

An Early Qing bowl with the "Magic Square" motif

Few years ago, I acquired the below bowl decorated with Islamic inscriptions  from Moongate, an antique shop in Tanglin.  Moongate was a long established antique shop which was in business since the 1970s.   After the end of confrontation, many excavated and shipwreck Chinese and Southeast Asian ceramic wares from Indonesia flooded the Singapore antique market.    There were also some treasured heirloom pieces which were passed down for many generations by the natives. According to the dealer Mr Goh, many members of the Singapore Southeast Asian Ceramics Society used to visit his shop and held frequent discussions.  Many of the collections of the early Singaporean collectors consisted of such export wares which were highly demanded by consumers from Southeast Asia since the Tang dynasty.   Chinese ceramics constituted an important export items which were gathered at ancient Chinese ports such as Guangzhou and Quanzhou and shipped along the ancient maritime trade route to region as far as Eastern Africa. 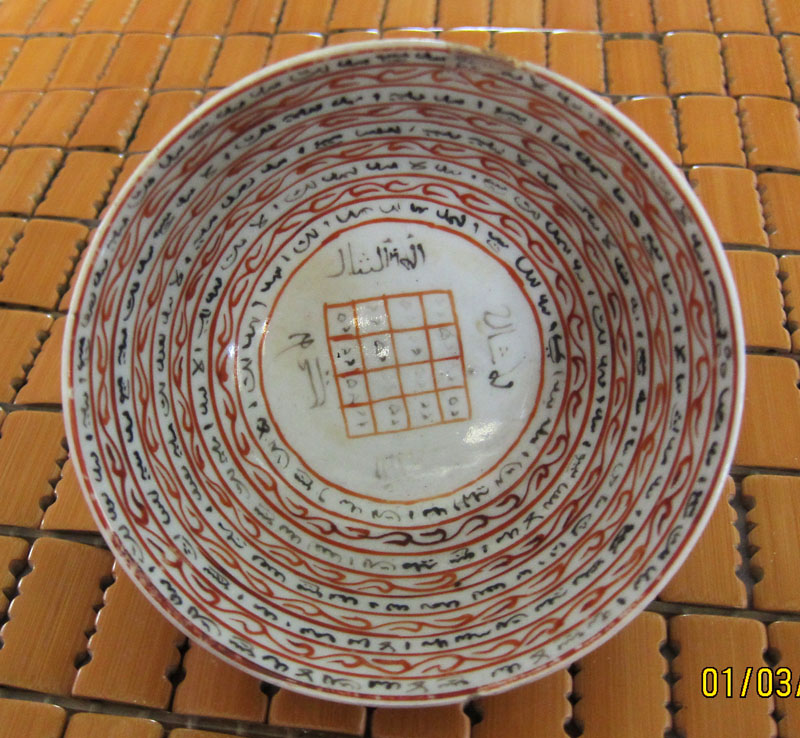 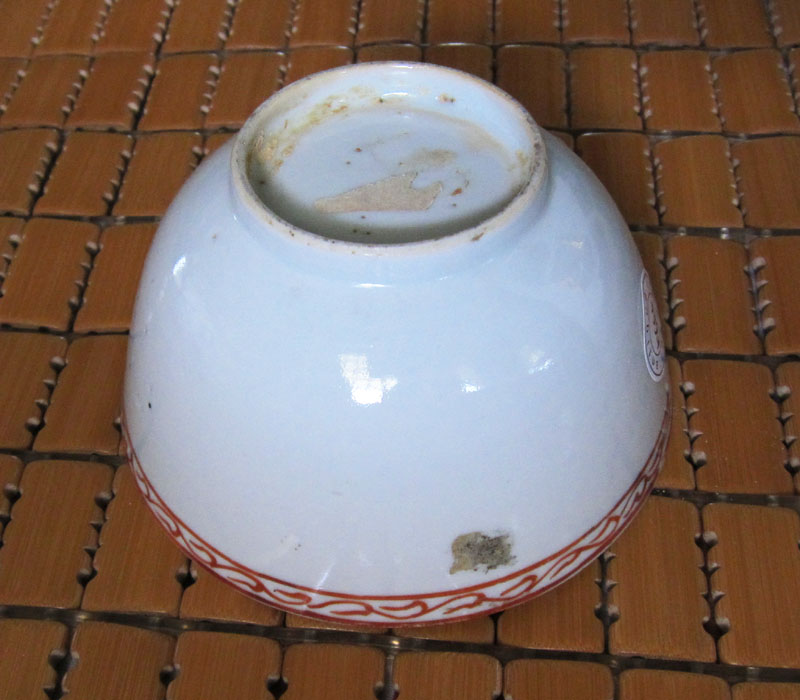 Chinese export ceramics with islamic koran inscription first appeared on Tang Changsha wares.    The Persian and Arab traders played a key role in the shipment of Chinese products along the ancient overland and maritime trade routes.  There were large community of Persian and Arabs in cities such as Guangzhou and Quanzhou during Tang Dynasty.  Ancient ceramics such as Yue, Xing and Changsha wares had been excavated in ancient sites such Fustat in Eygpt,  Basra and Siraf in the Middle East.   Many of the shapes and motifs found on those export wares drew their inspiration from Middle Eastern wares.    The Tang cargo from the Belitugn shipwreck was purchased by the Singapore Government and some of the fineness pieces are now on display at the Singapore Marina Sands ArtScience Museum.   The wrecked ship called a dhow  is of Middle Eastern design, and is quoted as the first physical proof of Persian/Arab direct involvement in shipment of Chinese goods along the maritime trade route.   After the the Tang period,  Chinese ceramics with Islamic inscriptions were apparently not produced.  It resurfaced again during the Zhengde period (early 16th century)  and formed part of the decoration for blue and white wares.  Many of such items were ordered by Eunuchs who embraced Islam.  Islamic inscription constituting part or whole of the design, in underglaze blue or overglaze enameled form, was particularly popular during the 17th/18th century and could be found in collections in the  Islamic world such as Indonesia, India and Turkey. 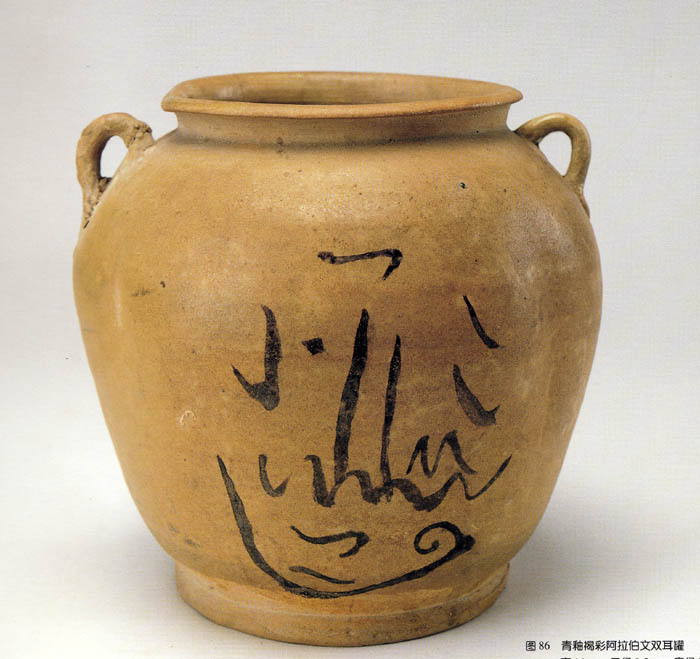 Changsha jar with Islamic koran inscription "there is no god but God" .  Translated in Chinese as "万物无主，唯有真主“ 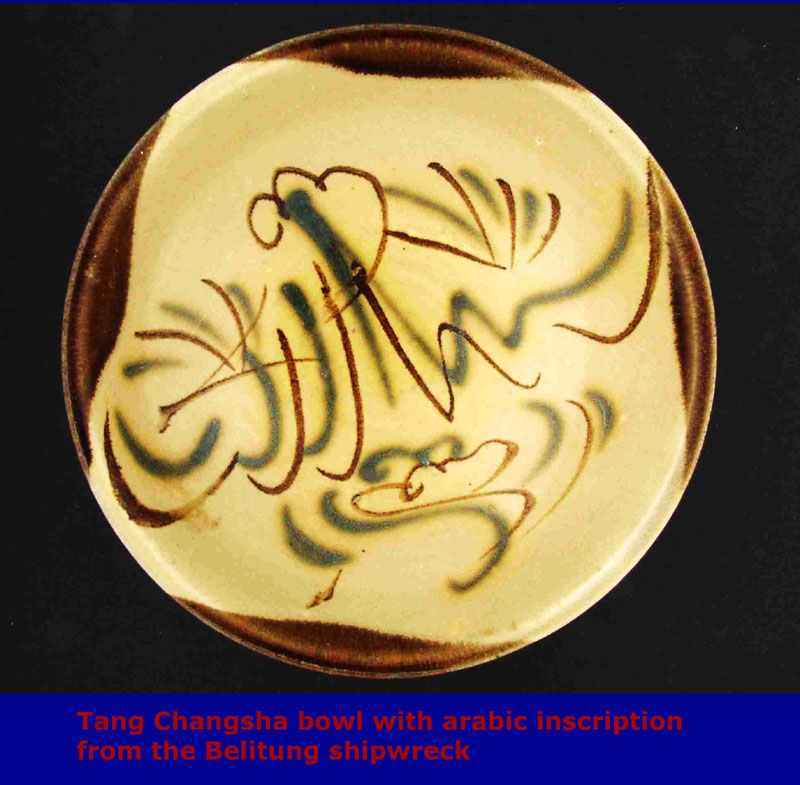 The symbolic significance of the motif on the bowl  intrigues me.  The shape and fine paste pointed to a 18th century dating for the bowl and is a product of Jingdezhen kiln.  I was very happy when I finally found an article entitled "Some Chinese Islamic "Magic Square" Porcelain" in the book "Studies in Chinese Ceramics" by Prof. Cheng Te-kun.  He learnt from a Singapore collector Mr Tan Yeok Seong that a group of Chinese export wares decorated with Islamic inscriptions and magic square surfaced in the Singapore antique market in 1969 and were eagerly snapped up by local collectors.  Such items appeared to be rather rare and we could hardly  find one in the antique market nowadays.

In his article, Prof. Cheng discussed the significance and the origin of the magic square and also the meaning of the inscriptions.   He did research on a porcelain plate with the magic square encircled by bands on of inscriptions, similar to my bowl  in terms of design layout, which was presented to Queen Mary of UK when she visited Hyderabad of India in 1906 A.D.  It was a treasure of Golconda Fort. The plate was subsequently housed in the Victoria and Albert Museum.   The plate was a product of Jingdezhen kiln and dated to the 18th century.  The verses found in the bands on the inner wall of the plate were verses from the Koran and some Islamic prayer books.  He enlisted the help of Dr. Hassan Javadi from the University of Teheran to decipher the inscriptions.  There were mistakes in the  writing as can expected.  The Chinese potter who wrote the inscriptions did not know the Arabic language and simply copied the text from some samples.  In the case of the plate, Dr. Hassan was still able to decipher  majority of the inscriptions.  For eg. the first band near the rim was from verses 256 and 275(2) from the Koran.  It reads :"(In the name of God, the Merciful, the Compassionate God,) there is no god but He, the Living, the Everlasting.  Slumber seizes Him not, neither sleep: to Him belongs all that is in the heavens and the earth.  Who is there that shall intercede with Him save by His leave? He knows what lies before them and what is after them, and they comprehend not anything of His knowledge save such as He wills.  His throne comprises the heavens and earth; the preserving of them oppresses Him not: He is the All-high and the All-glorious".

Surrounding the square, there are inscriptions which is translated as follows: "There is no man like Ali (Cousin of Mohamed).  There is no sword like Zulfakar (his sword)".

The square is sub-divided into 16 small squares.   Each has 2 digit number in black.  The magic square in the plate is of the order 4.  There are 4 squares either vertically, horizontally or diagonally.  The sum of the number in any of the direction added up to the same amount.  In the case of that on the plate, it added up to 194.

The magic square originated from China.  According the the ancient Chinese literature dating to about 650BC,  During the time of  the mythical  king Yu (禹), there was a great flood.  He  tried to channel the water out to sea where then emerged a turtle from the river Luo.  It's shell has a 3 by 3 grid pattern with  circular dots of numbers.    The sum of the numbers in each row, column and diagonal added up to 15.  It is  the number of days in each of the 24 cycles of the Chinese solar year.   The square was called the Lo Shu or "scroll of the river".   The magic square  pattern is said to be used by the ancient  people in controlling the river.

During the ancient time, magic squares were believed to possess astrological and divinatory qualities, their usage ensuring longevity and prevention of diseases. Magic squares were known to Islamic mathematicians, possibly as early as the 7th century, when the Arabs came in contact with Indian culture, and learned Indian mathematics and astronomy. It has also been suggested that the idea came via China.

For more on the Magic square, please read this.

According to Prof. Schuyler Cammann of the University of Philadephia,  the magic square was used to express symbolically the essence of Islamic thinking in cosmology.  The magic square is considered to be a model of the universe and is said to be a graphic illustrations of the Islamic concept that Allah is both the Source and the Destination of all things.

Those plates and bowls with the magic square were used as medicine bowls in the Islamic world.   The koran inscriptions and the magic square is believed to impart magical power to ward off evil.  Such bowls and plates were previously treasured heirloom.  After passing down for generations, the significance were forgotten by most of their descendants and many were sold as antiques to eager collectors.

Most of the inscriptions contained many mistakes and even in highly corrupted form beyond recognition.  For my bowl, I would appreciate if any reader would let me know if they could decipher any of the texts.

I wonder why other professionals don’t notice your website much m glad I found this.
hawkeye premiiere reviews
Wednesday, October 23rd 2013 @ 6:48 PM

Outstanding blog you guys have preserved there, I totally valuate the effort.
economy of china
Friday, November 30th 2012 @ 8:45 PM

I have reservation regarding Liu Yang interpretation of some of those as landscape motif. In the Belitung wreck there are some landscape motif which are simplistic but discernible and not that abstract. Please go to the painted motif section on my article on Changsha ware and see an example shown in the middle of the last row of photos.

The mountain is drawn in simplistic form of continuous arc form. A clearer and less corrupted form of the Islamic inscription is shown on a jar I added in the article for easy comparison. It consisted of vertical lines and continuous arc. To me, it shows more similarity to the abstract mountain mentioned by Liu Yang. Basically, if we look at more of the depiction of subject such as floral,fish, animal, human being, natural landscape on Changsha wares, there are simplistic but the subject intended is still quite easily identifiable and not in abstract form. To me, the abstract mountain is a form of corrupted Islamic inscription with additional floral or cloud elements usually drawn at the top of the inscription.
Saturday, April 16th 2011 @ 10:16 AM

In the new book "shipwrecked" about the Belitung wreck Liu Yang states that the decor of the Changsha bowls formerly mistakenly interpreted as arabic inscriptionis indeed is an abstract depiction of a mountainuous landscape?
Saturday, April 16th 2011 @ 12:24 AM